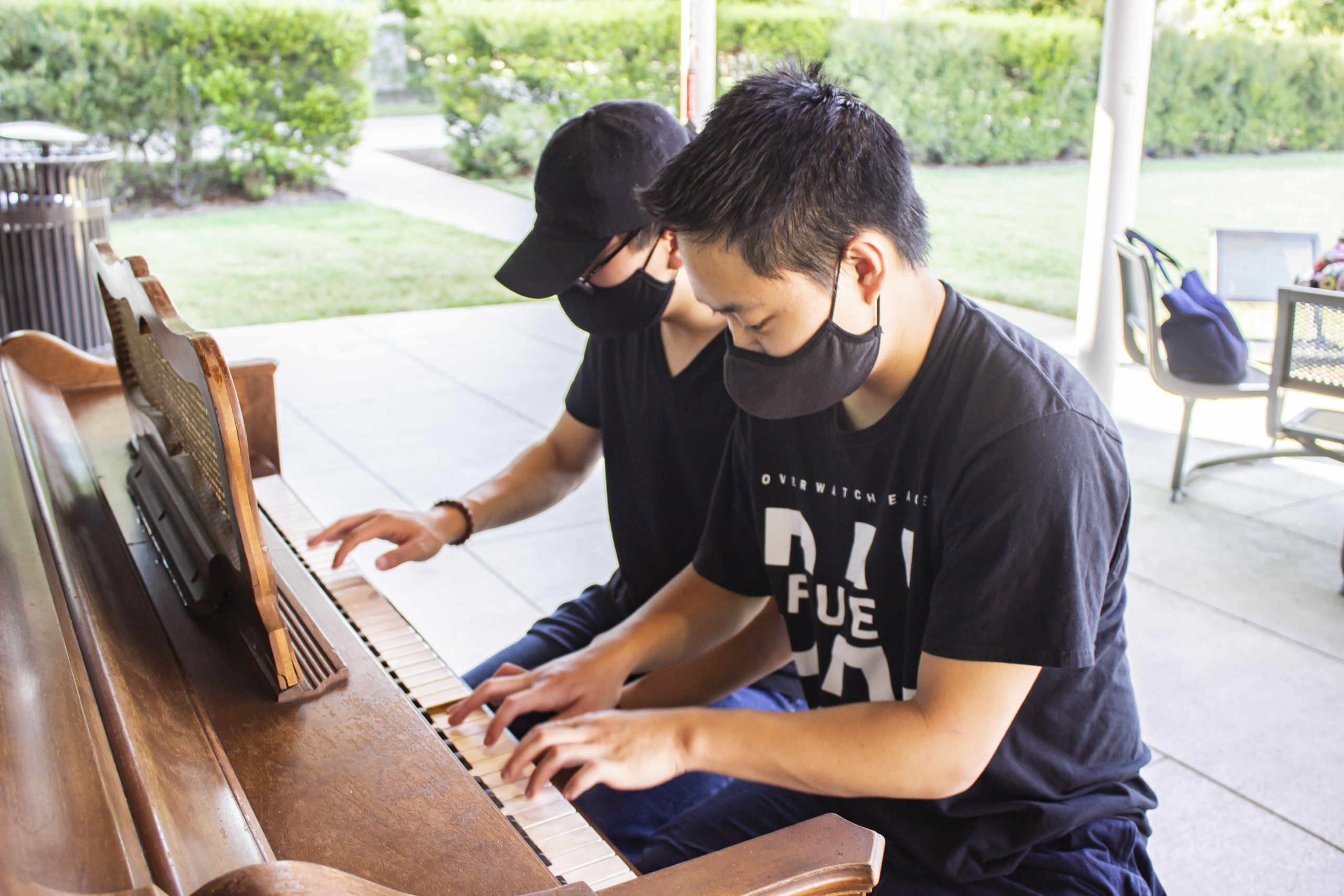 ATEC junior Caleb Wang strikes a wave of upbeat J-pop chords in the rhythm of “Fireworks” by DAOKO and Kenshi Yonezu. Chemistry freshman Nathaniel Nguyen sits next to him on the worn piano bench, rocking his head back and forth and animatedly humming to spur Caleb on. Nathaniel had just finished playing his own rendition of the “Your Lie in April” and “SAO” anime openings on the Student Union piano before him.

“Me and [Caleb] are very similar,” Nathaniel said. “We both like anime music. We both find solace in it. That’s just kind of our motivation. We just keep playing it.”

Caleb and Nathaniel have only known each other for a few weeks, but they’re already close friends. They met at the SU piano at the start of the semester and bonded over similar music tastes. It was Nathaniel’s first semester on campus – he’d never played on UTD’s public piano before. Caleb, on the other hand, had practiced at the SU piano so many times, he’s known to passersby as the “piano guy.”

“[Nathaniel] was playing songs I know on the piano, and there aren’t a lot of pianists on campus that specialize in playing the same genres as us,” Caleb said. “It was easy to start a conversation around it.”

When they did get to talking, Caleb learned that Nathaniel is self-taught – he picked up a keyboard when he was four years old and has been playing by ear ever since. Caleb, conversely, is classically trained; he learned to play the piano through traditional music lessons and reading sheet music. However, he didn’t enjoy playing classical repertoire, so he quit in the eighth grade.

“I started playing anime songs [instead],” Caleb said. “That’s what I wanted to play, but that’s not what you get to play in music school. You learn all this classical music and sure, it sounds nice, but those aren’t the songs you actually listen to. They’re not the ones you want to play. You want to play those pop songs that you listen to all the time or the songs in the anime you’re watching.”

That’s where the fun in piano playing comes from for Caleb and Nathaniel: only ever playing what they want to play, migrating from one half-learned J-pop melody to another.

Though there are pianos on campus in the Arts and Humanities building with clearer acoustics, tuned to perfection and in near spotless condition, Nathaniel and Caleb almost always find themselves playing at the aged, out-of-tune SU piano. They like the sense of community they feel when people recognize the melodies they’re playing.

“To put it bluntly, UTD is a nerd school,” Nathaniel said. “A lot of people know the anime songs we’re playing and even if they don’t, they’re not going to condemn you for it. Just earlier, one of the tables next to us was talking about Jujitsu Kaisen, and I’m like, ‘Nice.’ It’s very accepting here, and it feels cool when people clap or are like, ‘Yeah!’ when they recognize the songs.”

While Caleb and Nathaniel said that playing the SU piano is a great source of fun for them, they have to remember not to compare themselves to other players. It’s not healthy, Nathaniel said. They want to become better pianists – always – but they’re there to support each other and have a good time, foremost.

“Anyone can play this piano. You have people here, you listen to them, and you’re like, ‘Oh, this guy has no idea what he’s doing. But hey, he’s trying, and that’s what matters,’” Nathaniel said.

It was predicted that the SU piano would last five years when it was installed in 2017. Now in 2021, it’s weathered, out-of-tune and home to spiders. The piano is nearing the end of its lifetime; it’ll go soon. But the friendship the piano sparked between Caleb, Nathaniel and an indefinite amount of other pianists on campus is here to stay.