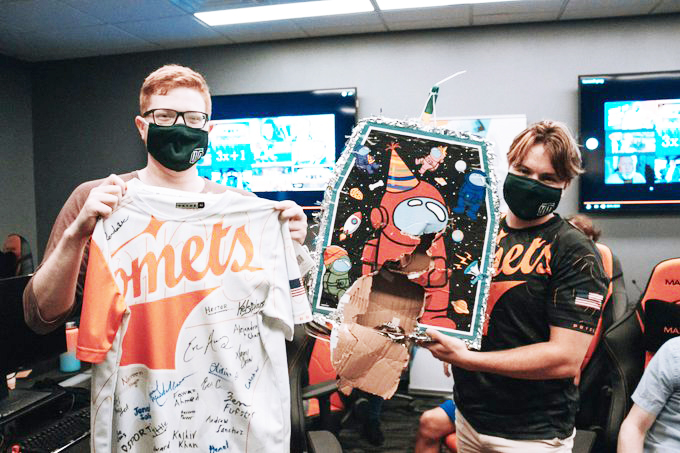 After three years of running UTD Esports, Greg Adler will be moving on to the LCS Operations team at Riot Games.

In his time on campus, Adler accomplished many things while refining the esports program. Starting with a League of Legends and an Overwatch team, the Esports team has since expanded into Super Smash Bros. Ultimate and Rocket League, added on multiple staff positions for coaching, social media and broadcast and won the first national athletics trophy for UTD in Smash Ultimate. More importantly though, Adler has laid the foundation for a team supported by passionate students with an emphasis on academic success. ATEC senior and Social Media Head at UTD Esports Hector Mavrakis said that the team’s focus is always on education.

“I think Greg, as opposed to many other program leads that I’ve heard of and talked to, has always always always punched in the fact that education is always first over everything else,” Mavrakis said. “I’m glad that he was able to kind of drill that into all of the student athlete’s heads that ‘if you don’t win a single championship here, I don’t care as long as you graduated with a degree.’ And I think that mentality was super, super key to keep everyone on board.”

Adler’s optimism and faith in every student in the program defined his time as its head. Students from the esports athletes, coaches, social media coordinators and even the volunteer commentators can recall how Adler set them on their path. CS junior and Smash commentator Hrithik Ochani said that Adler was the one who set him on his path to casting.

“Greg Adler was one of the greatest supporting factors I had. [He’s the reason for] the mark I’ve been able to make, the things I’ve been able to do right: casting stuff like the collegiate esports league that he himself was running. He recommended me to Rec Readiness, which was the group that was there broadcasting. If it wasn’t for him, I wouldn’t have had an amazing opportunity like that,” Ochani said.

Students attest that Adler saw whatever potential they had and always pushed them toward maximizing that potential. There is marketing junior Eric Aaberg, brought on as the first Student Assistant Esports Coach, who is now working an internship at Team Envy. While he had to turn away biology junior Avery Carter from playing on the Overwatch team, Adler then introduced her to the role of casting, which led to her role as Broadcasting Lead today. ITS junior and long-time Overwatch tank player Jonah Salinas said that early on, Adler saw the potential for him to be a leader and helped him grow into that role for the team.

“He always came to me and gave me advice and told me that he expects me to be the leader and has high expectations,” Salinas said. “And he sees a lot of leadership skills and qualities in me that I feel like a lot of people have not seen, but he saw it in me. And he believed in me and gave me the shot to essentially be like the team captain.”

As a coach, Adler was able to steady the course for all the teams in the esports program. While managing four different teams can be difficult, Smash player and CS junior Marcel Hayek said that Adler taught them a team mentality as well as how to stay in the mental game throughout sets and series. Additionally, Hayek said that Adler was a constant and consistent motivator.

“Greg was the one I would turn to for motivation. He knew whenever I felt bad. Whenever I did bad at a tournament, even before I even said anything, he’d be like ‘don’t even worry about it. You got this in the next one. Don’t beat yourself up about it. You got this. It was just a bad day.’ He constantly motivated me. He was always looking over all of us at the team,” Hayek said.

On top of being the team’s motivator, Adler was the team’s mentor and biggest fan. One of Aaberg’s favorite moments with the team coach was when he jumped from the commentator’s desk at a Smash regional above another player to celebrate with the team. And for Salinas, it was when he made a series-saving play in a playoffs bracket.

Adler was a major presence in the burgeoning collegiate esports program, helping to set up the Collegiate Smash Bros. League and providing an example of what a successful collegiate program looks like. GCU League of Legends Head Coach Sean Shannon said that Adler was always willing and ready to help others.

“He’s just an overall really solid, genuine kind of guy when you get to know him. And then when it comes to like who he is in the workspace and everything like he’s really driven, he’s really focused, he’s super dedicated. I think a lot of the success that UTD saw under his leadership is in no small part due to his leadership there in the way that he was able to get the most out of the students,” Shannon said.

After his time at UTD Esports, Adler is moving on to join the LCS Operations team at Riot Games. While he doesn’t have a lot of details on what he will be doing, he said that he’s excited to take the next step in his career and continues to have his trademark faith in UTD students and the program.

“In the grand scheme of things, I was [at UTD] for three years, and I think this program is going to be there 20+ if not a lot more. So I think we did a really good job kind of creating a foundation, you know, getting some strong students and some good leadership,” Adler said. “The students are absolutely incredible. I mean, really they’re some of the best individuals I’ve ever met.”

“I just kind of want to thank the students. You know I say it, but I don’t say it enough really. They are, they are everything to this program. I mean, without them literally nothing could have happened at all. So, uh, you know, just thanking them for all of their hard work and I can’t wait to see what the future holds,” Adler said.