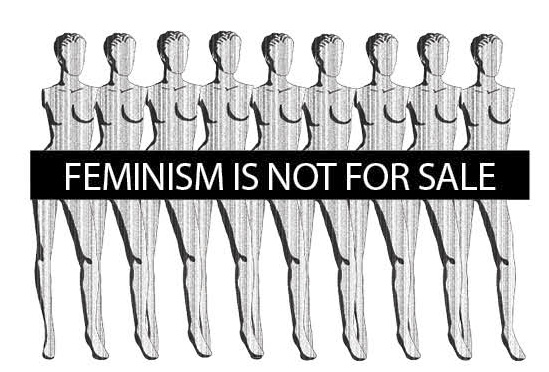 Feminism is not for sale

The demise of a human right

It has always served in the interests of consumerism to place people in mutually exclusive boxes.
“The feminist” label is put in one such box. It commonly refers to men-hating, pants-clad, shark-like females.
The feminist label is deemed inconvenient for the entertainment, beauty, jewelry and fashion industries — the four industries that profit-hunkering businesses associate with women.
Males are consequently put in a box that tells them they must earn more than women, encourages their involvement in all things macho and dissociates them from any display of emotion, save for immature displays of male sexuality.
Firmly entrenched in our beliefs, these labels have given way to stereotypes that are self-fulfilling, a psychological state where we satisfy the positive or negative expectations society has of us.
Right from the start of the feminist movement in the United States, the business world has worked toward proactively labeling gender-equality movements into a conversation about women’s bodies and how much or how little they’re allowed to show, allowing industries to exploit the bodies of women to catapult their brands’ marketability.
It has suited their purpose to divert the attention away from feminism’s true cases, including equal pay for men and women and paid maternity leaves that would affect their bottom lines to the sex appeal of the female form.
As corporations slowly abandoned moral obligations to causes in favor of greater capital, mass media assumed the role of the business mouthpiece and selectively chose what aspect of feminism’s past to share with the public.
Our distorted memories of what happened in the Miss America pageant protest of 1968 is a failure to honor the role of women in American history, writes Jennifer Lee, director of “Feminist: Stories from Women’s Liberation,” in a June 2014 TIME blog titled “Feminism has a bra-burning myth problem.”
“There is no statue on the Atlantic City Boardwalk to commemorate an important protest about standards of beauty for women and a contest tied into capitalism, war and race,” she said in the blog. “Instead, our cultural touchstone from that day is the negative and trite association of feminists as ‘bra-burners.’”
With two words, the media managed to place two parallel images in our minds: a lingerie item and a topless woman, both instantly drawing attention to the body and away from the issue.
We forgot that feminism was about choices: the choice to vote, the choice to work or stay at home, the choice to be a mother or a wife, the choice of a job and the choice of sexuality.
We forgot that feminism didn’t include demeaning others who didn’t choose what we chose, that it meant getting rights for ourselves that were not to be taken away.
Big business has managed to make us believe that women who identify as feminists are interested in being promiscuous, nudity-loving females who refuse to adhere to traditional roles or women that feel they need to suppress their femininity and bodies to be able to fight fair in a world controlled by men.
Simultaneously, the business world spread the notion that a woman could certainly work beside a man, but it also stressed that a female breadwinner, in her jeans and callused palms, was hardly a real woman.
Women applying for corporate jobs have been advised to not be overtly sexual, to cover up their cleavage in an interview, to wear a pantsuit if they want to be taken seriously by men and to not take maternity leaves more than necessary to avoid falling behind in the race to the top of the ladder.

As media, big businesses and consumers all focus on not letting men open car doors for women, core issues such as equality of pay, reducing high female infanticide and feticide rates, high maternity deaths and illiteracy of women have taken a back seat.
Women have avoided studying science, technology, engineering and mathematics, or STEM, subjects for the longest time with less than 25 percent of STEM jobs held by women, according to a 2011 report released by the U.S. Department of Commerce.
They have preferred to go into less-demanding professions such as nursing and teaching that they believe will help them juggle their family commitments while at the same time earn lower than their partners to keep the balance of power even in their families.
Consequently, women make up 81 percent of elementary and middle school teachers, 94 percent of administrative and secretarial workers and 90 percent of registered nurses, according to the Leading Occupations for Women in 2013 report released by the U.S. Department of Labor. The median weekly wages for women in all of these professions is $100 less than the wages for men in the same positions.
The number of female faculty that research schools have is equally dismal. Only 28 percent of full-time senior faculty in science, health and engineering are women, while women comprise a total of 35.7 percent of all positions that employ doctorate holders in the United States, according to “Science and Engineering Indicators 2014,” released by the National Science Foundation.
At UTD only 122 faculty members are women — a measly 29 percent of the 536 who teach here.
We live in a world where there is not one nation that can truly say women and men have the same privileges or pay and are perceived in the same light by their peers.
The U.S. Congress is 81 percent male in a country yet to see its first female president.
In nations that have voted for strong female leaders, such as India and Pakistan, a majority of women are still illiterate, sexually abused and forced to abort female fetuses, according to the United Nations.
In India, which has celebrated several renowned female leaders in the past 100 years, marital rape is not constitutionally recognized as a punishable offense.
In Liberia, headed by the first female African head of state Ellen Johnson-Sirleaf, less than half of women giving birth have a doctor, nurse or certified midwife present at the time of childbirth. Almost a thousand women die during childbirth for every 100,000 babies born in Liberia, according to a UNICEF statistic.

We are well into the 21st century, and we are still grappling with the issues that we were dealing with three decades ago. While the numbers have changed, the problems themselves have not.
As people, we have allowed ourselves to be cheated by big conglomerates into believing that women are far better off today and that progress has been made. Partners are helping in the home and women can choose to leave their partners or be single moms without facing economic consequences.
While all of this is important work accomplished, a lot more remains to be achieved.
Part of the process forward is to recruit men and women to work for gender equality together, as Emma Watson called for in her speech on Sept. 20 at the United Nations.
The other part is to look at women across the globe and how they affect their societies and children as we work to end the disparity between men and women, both psychologically and physically.
Men are still not comfortable with the idea of earning less than their partners as a 2013 study “Gender Identity and Relative Income within Households” funded by the National Bureau of Economic Research found. In many developing countries, men define what they want or don’t want in their partners, and women are raised to fulfill those expectations irrespective of what the women want.
At the same time, society does its best to reinforce stereotypes about women that in the long run prevent women from breaking out of the mold, as early as their teenage years.
We tell our daughters they are poor drivers, bad at math and bad at logic until they believe it to be true of themselves and of other women. We communicate to our sons through actions and beliefs that they must be emotionally stunted and make enough money to feed a family to be esteemed in society.
It is beyond time for people to see that while women across the globe have become significant contributors to the economy, they are still, in many ways, accessories to men.
Our step forward must be two-pronged: We must allow ourselves to acknowledge history without the veneers of big money contorting it, and we must condition ourselves to treat the men and women in our circle with equal standards and see them first as people and then as men or women.
As parents, teachers and role models, we should think through the psychological and physical consequences of our actions on fresh minds and how they might perceive and translate these actions to reflect on their beliefs of themselves.
As thinkers in a free world, it is our duty, our moral obligation to those that came before us and ourselves, to defy conformity fostered by consumerism and exercise our choices that will truly make us a gender-equal civilization.

Comets and Craters, but really all Comets