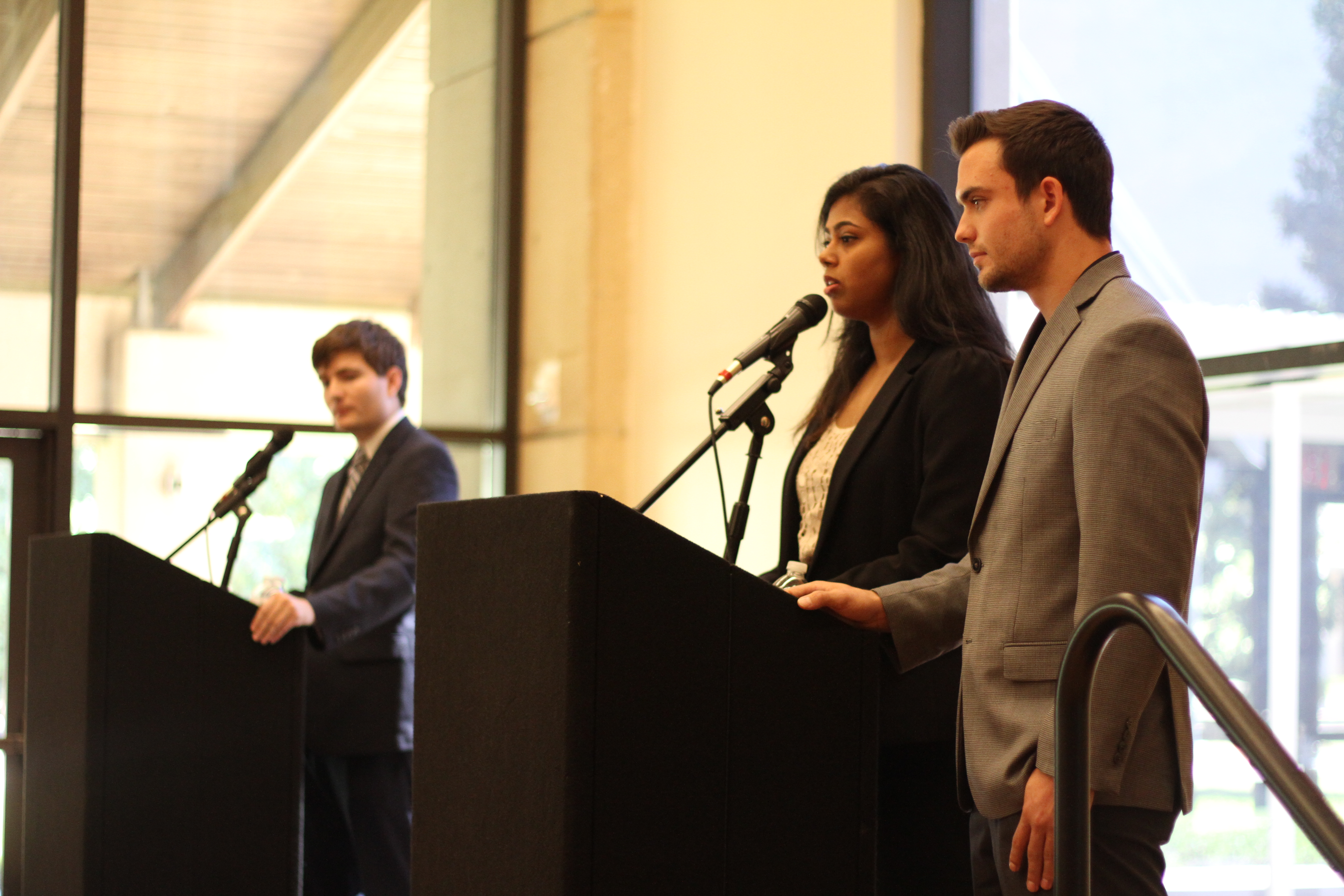 On March 22, Student Government hosted a debate between Adam Richards, the “Progress UTD” candidate for SG president and Akshitha Padigela, the “United as One” candidate, along with her VP candidate, Joey Campain. For a number of reasons, the debate was moved to the bottom floor of the Student Union during one of the busiest times of the day.

Everything quickly went downhill. Even though I was sitting just a few feet away from the stage the candidates were on, it was almost impossible to hear them over the roar of incessant chatter and games of pool. On top of that, a number of technical issues with the microphones and speaker for the event didn’t make matters any better.

The most frustrating aspect wasn’t any of these problems, however. The biggest problem was how clear it was that the people who were around couldn’t care less about what the candidates were talking about.

As a student, I felt embarrassed for everyone involved. That’s not to say they did a bad job given the conditions they had to work with. I felt bad because I knew that the candidates on the stage were fighting tooth and nail to get a message across to people who couldn’t care less about what they were saying.

When the election results came out and it was revealed only 7 percent of the student body voted, I’m sad to say I wasn’t surprised. For years, SG elections have had low turnout, even though the job they have is incredibly important to student life.

This year alone, SG members have helped search for a new president, inform students about the complexities of UTD’s sexual assault policy and been a voice in the debate about campus carry. Even though other universities’ student government bodies may have more power comparatively, SG still does an enormous amount of work for students.

That’s why it’s always so frustrating to see how little people actually want to be informed. When The Mercury came out with its endorsement of Richards for president, we received a fair amount of flack for the article from those who disagreed with us — which is fine. One of the things I’ve enjoyed most as EIC is having open discussions with students about what they think can improve on campus, even if those thoughts don’t align with mine.

What did discourage me, though, was a letter from a student that, among a long list of criticisms about the article, had a line where the student said they didn’t care about SG as long as they’re doing a good job.

The problem with that is by the time students realize SG could be doing something better, it’s too late to take action. The whole point of having elections is to allow students a voice in the process on who will represent them to the university. If students choose to not care about participating in that process, then they’re forfeiting their say in that representation. If you only care about something when it’s not working, then it’s hard to say you care about it at all.

The reality is there will be problems SG will face that will have serious repercussions for the campus community. When only 7 percent of the student population has voted for them, however, it makes it difficult to say they actually represent the student body. So when problems actually come up, how difficult will it be for them to go to administrators with a sense of credibility?

While it’s true there can always more that SG can do to advertise themselves and make students aware of the issues facing them in the election, students themselves need to get more involved. If not, we risk SG’s legitimacy going down, which can only hurt students as a whole.

Even though The Mercury didn’t endorse them, as Editor-in-Chief I can say with confidence we will do everything we can to support Padigela and Campain in their new roles. That will sometimes mean praise, that will sometimes mean criticism. But more than anything, it means caring. Unfortunately, it sometimes feels like we’re some of the only people who do.

I couldn’t agree more! In my six years at UTD, student apathy has consistently been my single frustration against our student body. I can’t understand how students can express outrage, no matter how justified, when a university decision goes against their own interests, be it health insurance or campus food, but not have the interest to open up a website and cast their votes for the very people who could be their allies in representing their voices. We, as a student body, continue to enable SG as an elite organization by not caring enough in the running of our university,… Read more »