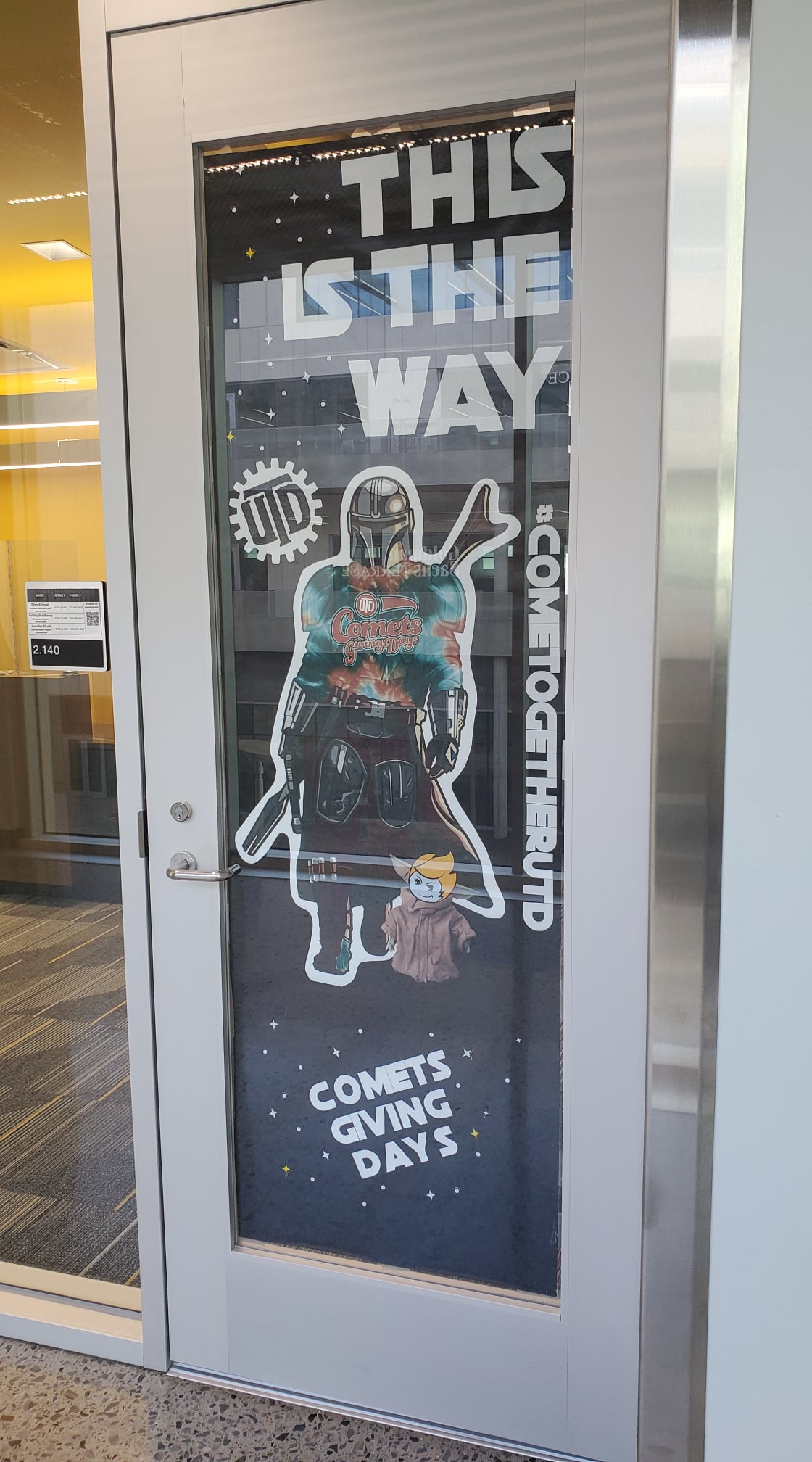 In keeping with a six-year tradition, the Comets Giving Days will take place from 10 a.m. on April 6 to 6:49 p.m. on April 7 for a total of 1969 minutes in recognition of UTD’s founding year. Students, staff, alumni and community members are encouraged to donate to their favorite UTD schools or programs during these days. A series of leaderboards, gift matching programs, and challenges track and incentivize donations. One of these challenges invites groups to decorate a door with their artwork and the hashtag #COMETogetherUTD. The best door decoration is chosen by the number of likes the design receives on Facebook; winners receive extra funds for their area of choice. The theme of this year’s contest is “tie-dye.”

Lane Hughes, a junior biology major and member of the Honor’s College’s Collegium V Council, spearheaded a group of honors students’ door decoration efforts. Their design idea used wordplay to emphasize the theme as much as possible.

“The title of our door is ‘Tie-Dye Die with Tie Dye Ties,’” Hughes said. “We’re still workshopping the name, but you can see the tie-dyed die shape, plus the five Temocs with their tie-dye ties forming the face of the die. Try saying that sentence three times fast!”

Instead of just decorating the door alongside other Council members, Hughes used this as an opportunity for a group event. Last Saturday afternoon, he and senior biochemistry major Merry Wang gathered along with several other honors students to tie-dye a white sheet for the base of their design and make Temoc heads out of construction paper. Securing their design to the door was a challenge, since they opted to use a sheet for the base instead of butcher paper, but duct tape and Command strips eventually did the job.

Hughes speaks to the creativity required to successfully manage the door decoration endeavor.

“Overall, it felt like a summer camp arts and crafts project. Except, we had to plan and implement the entire thing rather than just having it handed to us,” Hughes said.

The Terry Scholars, led by ATEC senior Daemion McKellar, also participated. McKellar said that if he were to win the prize money, he would donate it to the Terry Scholars, as their history of community service means it would likely to go to a good cause.

“They do a lot of service events to help communities nearby, such as food pantries, park cleanups and can drives,” McKellar said. “Additionally, they do community service for the UTD community, such as donating to the Comet Cupboard and doing a book drive for Autism Awareness Month.”

McKellar credits the design idea to his partner, Roxanne Sanchez, who combined UTD’s galaxy theme with tie-dye through a vision of Saturn cracking and tie-dye oozing out of it. They drew the outline of their design directly on the door with chalk marker, did the biggest parts of the background and Saturn in black and white, and finished by filling in the colorful ooze in a tie-dye pattern. As an extra touch, they added in splattered white patterns to represent stars.

Hughes hopes that the funds from the door decorating contest go to the Honors College.

“They’ve given us so much, and it would be wonderful to help fund other programs for future students,” Hughes said.