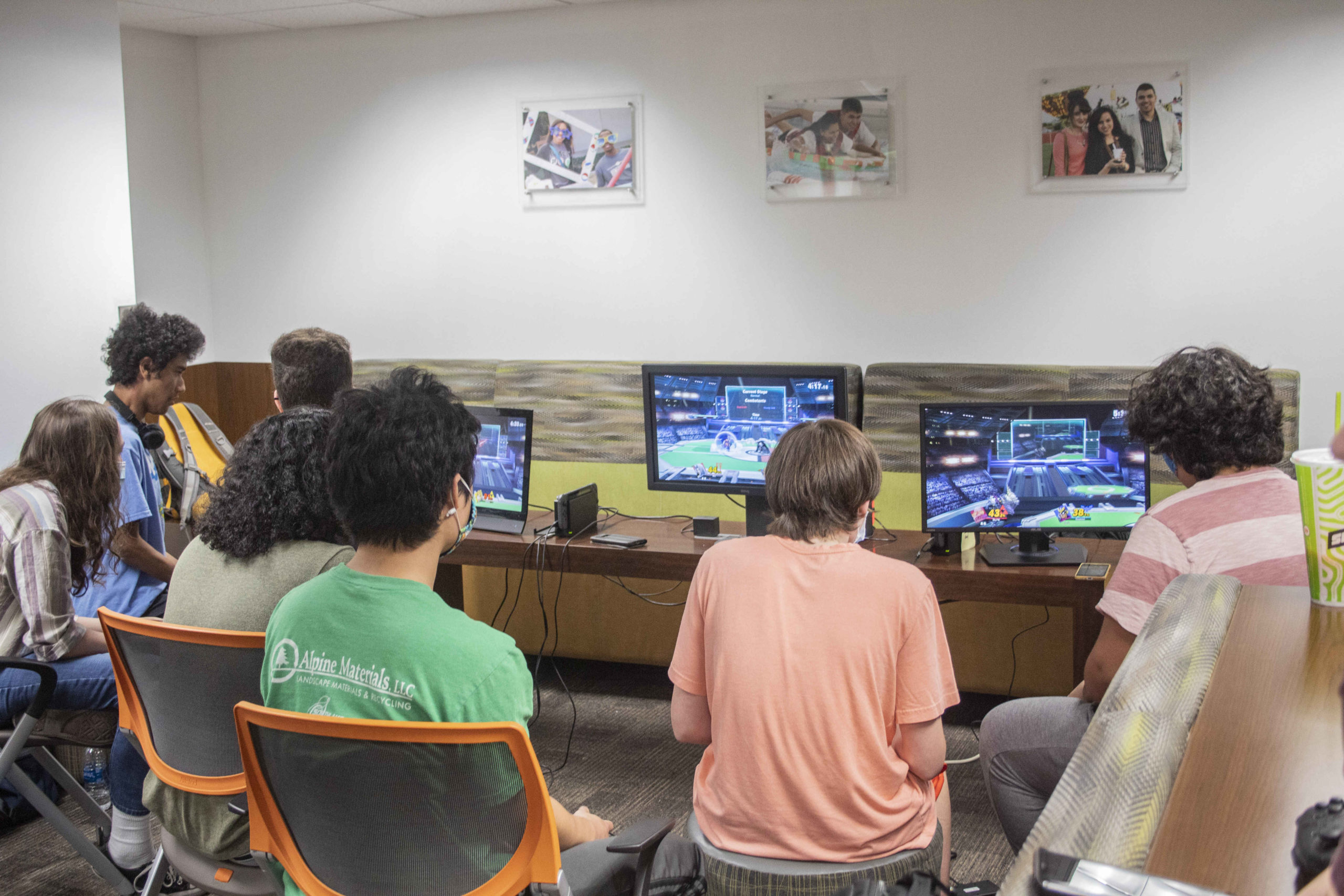 Comets and local DFW players fight through a pool stage to make it to the bracket stage. Photo by Ben Nguyen | Managing Editor

Comets can return to on-campus Smash Ultimate battles against top players in the DFW area with the return of Comet Clash to the SU on Sunday evenings.

The student-organized Comet Clash Smash tournament returns after spending time at the Blackstone Launchpad and waiting out the brunt of the pandemic. The on-campus local provides a cheap and easy way for students to compete against top-ranked players in the DFW area, as tournament organizers Chaynen “Sun” Casas and Kenny “Duallium” Gausserin have put together an event that pulls over 60 players per night. Duallium attributes the event size to its college-oriented entry fee.

“We exploit the poor college students (laughs jovially). Like we’ve always been catering to that because since the beginning, we’re always three dollars no matter what. We’ve turned down venues for that reason, basically that’s the one thing CC won’t budge on,” Duallium said. “It’s always going to be the affordable tournament, and because of that, everyone comes; and you get a mix of the top of the top with like Orex over there. And you have people who have never touched Smash or they’re just peering through the esports room watching them practice, and they’re wanting to see what they can do to get on that team.”

However, if you’ve seen the TV room at the SU, you may wonder how an event typically filled with so many people could fit there. The answer is in the initial pools stage, splitting the field into two pools of people that are seeded into matches against each other. They then rotate the groups of players through nine or 10 setups to knock out players and qualify the winners for a bracket stage.

“As soon as we get a match reported, we’re already sending in the next group to that setup that just finished. And then as soon as we finished that first round in the winners [bracket], one of us dips down into the losers bracket and starts already assigning those losers matches to get that one moving through,” Duallium said.

This ensures that the TV room is never too crowded and that they’re able to continue using the space to run the tournament. Older students might remember tournaments being hosted in the Blackstone Launchpad or wonder why the esports room isn’t used, but Sun said that the SU provides a reliable space to play the game without being super crowded.

“Unfortunately, the esports room, it’s just too condensed, like we have that many people. It’s everyone crowded, it’s cramped up, it’s a health concern,” Sun said. “In terms of being in the SU, like, she’s always been our fallback. Like it’s kind of an annual thing at this point. We do good, we find a venue that we’re happy with. We think everything’s nice and dandy and then something comes up where it’s like, ‘We have to renegotiate our partnership,’ or ‘Actually forget it, we’re done with you guys.’ So this is always going to be here for us, it’s always reliable, it’s our home.”

The Blackstone Launchpad was previously used before COVID-19, but once the pandemic hit the Comet Clash organizers were forced to wait for the venue to reopen for use. Since Duallium is already an alum of UTD and Sun is close to graduation, new students on the Smash team and in the UTD Smash community will have to step up to keep the event on campus. Student players like current team manager Zen “Fufa” Farris will have to act as a middleman between alumni and the campus to keep the event going.

For Sun and Duallium, the event is more than just an opportunity to play. It’s a place for students to prove themselves and practice against top-tier players without having to pay venue fees like for the Freaks Richardson tournament, which can go up to $12 on top of tournament fees.

“Comet Clash has always been there as a way to kind of, you know, instead of sending off the kids to the talent, bring the talent to the kids. And then they just get to play with the high-level players. And then over the course of a semester to a year, you start to see them develop and become better players,” Sun said. “The loyalty and respect that we have amongst each other, it’s like family. Because you talk to some of the people that started at Comet Clash and they would advocate that if it wasn’t for Comet Clash, they wouldn’t be where they’re at.”

And so, back in the SU, with some of the best and brightest in the community, Comet Clash is here to stay. After some initial hesitation, Sun said he’s glad that they were able to bring the tournament back before he graduates from UTD.

“People were worried about the first time back two weeks ago, but thankfully we were able to pull it off and I heard nothing but good comments, compliments and just everyone glad that we’re back in action again.”