Representing art from nine UTD alumni, the Derive Art exhibition, located on the third level of the Administration Building, went on public display on Sept. 26. Art pieces will rotate in and out of the gallery in late November. Photo by Anupam Gupta | Mercury Staff.
Campus News
Featured
News

Walking down the corridors, one can notice that this is not a regular hallway in the Administrative Building. Adorning the walls are art works by nine high-profile UTD Master of Fine Arts program alumni.

The level-three corridor of the Administrative Building is home to the Derive Art exhibition, with digital, canvas, wood and fabric art coupled with colorful “Cause Flowers” on one side and a zigzag pattern of homeless signs on the other side. Curated by Greg Metz, an Arts and Humanities senior lecturer, this exhibit is titled, “Like a Tornado Touching Down, The Dream is Connected to the Dreamer,” and went on public display on Sept. 26.

The connotation of a tornado in the exhibit’s title is symbolic of the kind of impact he was hoping to create with the specific art works that are part of the installation, Metz said.

“If you’ve ever been in the aftermath of a tornado, you will see how it hits certain places and destroys that and right next to it, there will be something perfectly untouched,” he said. “As you walk down the hall, maybe there’s something that hits you, that turns something up in your mind that you would have never thought of before. And with Derive Art, that’s what we’re doing.”

Metz said because the exhibit work was in collaboration with the university, they decided to  feature the work of the MFA program alumni. This art exhibit includes two installations — the homeless signs by alumnus Willie Baronet and the “Cause Flowers” installation by Stephanie Hargrove.

“We wanted it to be a contiguous thing down the hallway. We didn’t want it to be a hotchpotch of art work,” he said. “So the homeless signs and the ‘Cause Flowers’ are two unifying pieces and they face off against each other in a way.”

Stretching from end to end on one side of the corridor is the homeless signs installation by Baronet. He has collected homeless signs since 1993 to deal with his discomfort and fear of connecting with them and seeing them.

“It really began because I didn’t like the way I felt when I saw people on the street,” Baronet said. “I would ignore them or avert my eyes. The idea to buy the signs was a way to change that dynamic. I began buying signs long before UTD in 1993. The project, I believe, became more focused at grad school at UTD in 2008 when I began to become more serious about this as an art project.”

In one of his graduate classes under Metz, Baronet’s “We Are All Homeless” project came into existence and has grown over the years.

Since then, Baronet has given TED talks and created a feature film to try to introduce and de-mystify homeless people. Along with putting up the signs he has collected, Baronet also puts up a board to collect answers from people for the question “What is home to you?”

As part of their research, Metz and his team intend to stimulate creativity among the workers by putting artwork in working environments. This exhibit is their attempt to introduce art to places where people typically don’t go to galleries. Converting a regular institutional hallway into a contemporary gallery venue is part of their research to “take the art to the people.”

The art exhibit is scheduled to be on display until late November and will then be replaced by another one. Metz said the idea is to rotate art works because he believes that art work habituates and after a few months, people just walk by it and the art is not engaging anymore.

Metz said he wanted to feature socially-active pieces in the hallway of the Office of Research and the Office of Development. He felt it fitting to have it in that specific environment to show how artists are trying to make a difference in the world through their art.

This kind of art exhibition was first put up in the Venture Development Center at UTD as a sample of Metz’s prototype idea. Metz said with the first installation in the Administrative Building, he and his team have plans of expanding this idea to other parts of the campus in the future.

“We’re talking to the Alumni Center about some large pieces for that and we’ve talked with the JSOM too. Now everybody is like ‘How do we do that?’” he said. “So this will stay up for a certain period, like four to six months, and then we take them down.”

The exhibit makes people think and he is hopeful that every time people walk down the hallway, they would perceive an art work in a different way, Metz said.

“Every time you go down the hallway, you encounter this work and get into a relationship with it and it can turn up something that might stimulate, or something can hit you suddenly and it can make a difference,” he said. 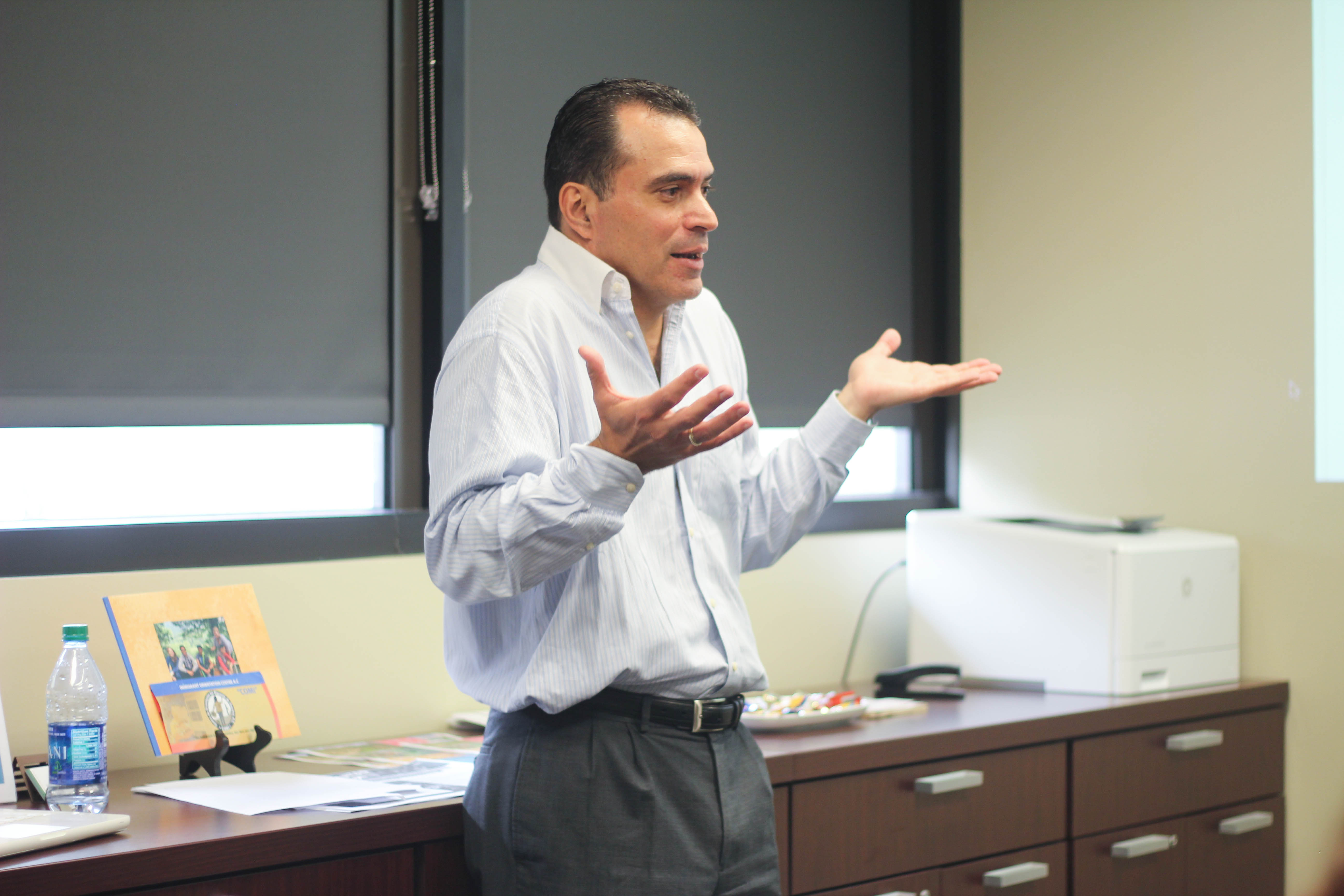