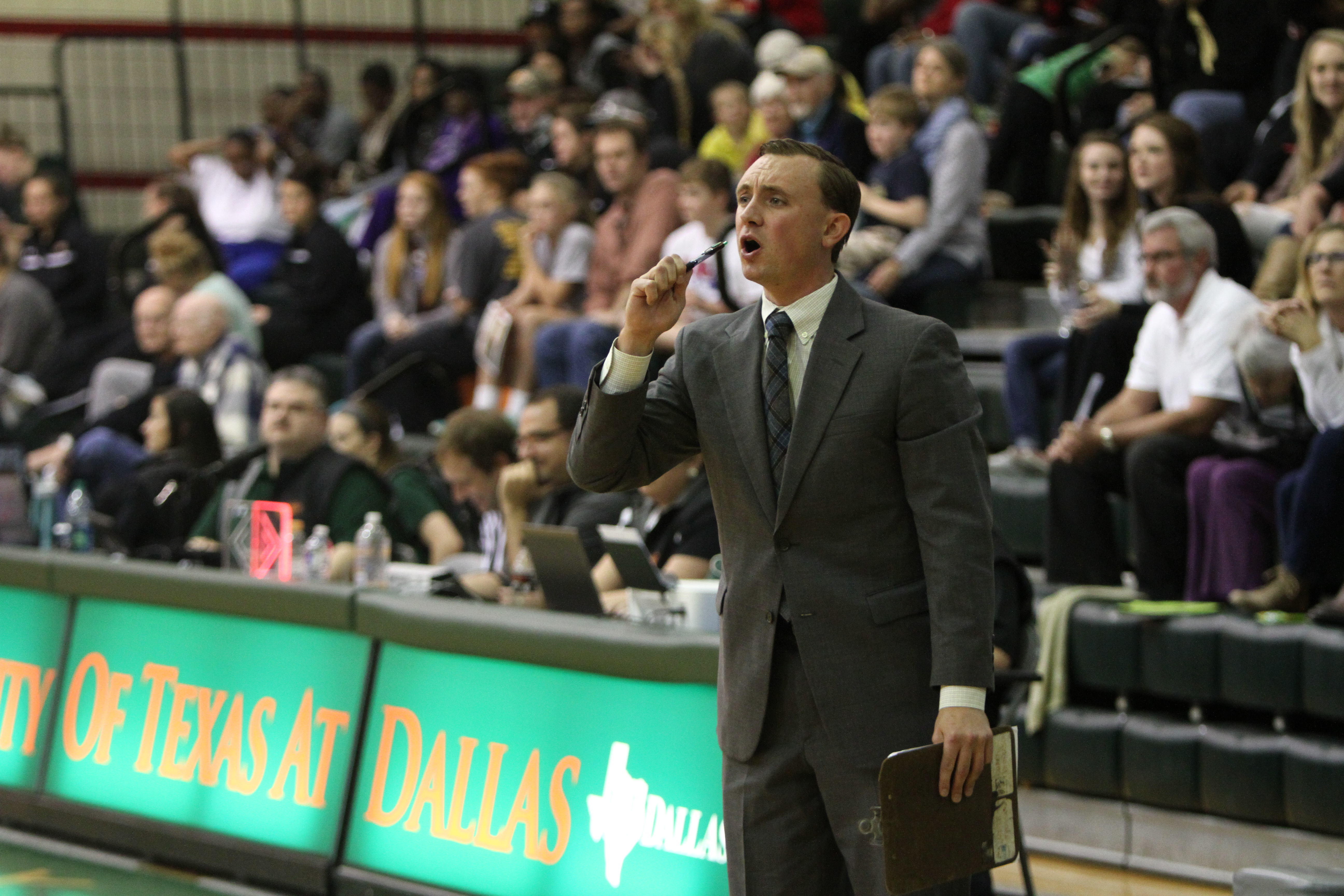 Arun Prasath Carruthers is now in his eighth year as an assistant coach for UTD. Prior to that, he played his collegiate career as a Comet, leaving his mark as the program’s all-time leader in assists.
Basketball
Sports

Sideline Stories 1: UTD all-time leader in assists takes role as second-in-command after solid career, aims to be a head coach one day

It was the start of the 2007 basketball season, and the men’s basketball team had traveled to Buffalo, N.Y., to play in a tournament. Assistant coach Travis Carruthers, on the sidelines for the first time, didn’t have any dress shoes.

With no other choice, Carruthers opted to wear a pair of khakis, a sports coat and crocodile-print cowboys boots as the outfit for his professional debut.

As he walked out onto the court during pregame warm ups, head coach Terry Butterfield got a chance to react to his assistant’s wardrobe for the first time.

“I remember walking on the court and (Butterfield) stops on the way to the bench while our team is about to warm up and he goes, ‘Did you really wear cowboy boots?’” Carruthers said. “And I kind of chuckled and was like, ‘Yeah.’ And he goes, ‘Don’t do it again.’”

Carruthers, now in his eighth year of coaching for the Comets, has come a long way since the early days of his career. Before his days as a coach, he spent his time resetting the record books for the Comets.

Before graduating, Carruthers left with the program’s high marks for assists (411), assists per game (4.3) and free throw percentage (.878). Although he eventually found success with the team, Carruthers’ career didn’t initially go as planned.

“His strength was an issue, initially,” Butterfield said. “He basically sat the entire first year on the bench and really didn’t get much of an opportunity at all, maybe some mop up minutes here and there.”

Butterfield said he initially thought that Carruthers wouldn’t be very impactful for the team.

During his first year, Butterfield told Carruthers that he had to be more physical because he wasn’t quick or fast enough, Carruthers said. After that first season, he spent his entire summer in the weight room and in the gym working on getting bigger, he said.

“My buddies were out going to the lake and doing fun things, and they would call me and I would say, ‘Hey, I’ve got to work out after work,’” he said. “I would work all day, and I would go and spend time in the gym and spend time in the weight room, because I had a passion for it. I had a passion, and I had a goal in mind that I wanted to play and I wanted to be a difference maker.”

Coming back for his second season, he still wasn’t getting a lot of playing time. That all changed after Butterfield had become frustrated with the play of his point guards. He decided to start Carruthers out of desperation, Butterfield said.

That decision proved to have a tremendous payoff for the Comets, as Carruthers helped the team earn its first ever ASC championship and a spot in the NCAA tournament.

Carruthers’ role on the floor was more of a floor general, dishing the ball to his teammates to score, which helped him lead the team in assists that year. He said he always had an eye for passing the ball.

“Me — as a person and as a player — I think they mimic each other,” Carruthers said. “I really enjoy the success of others if I have a hand in it.”

As his career progressed, he would continue to help his team reach that success. In his last year, the team once again made history by being the only Division III team to defeat a Division I opponent when it took down UT Arlington.

As his playing days came to a close, Carruthers already knew he wanted to be a coach, something he said he decided when he was a freshman in high school. He went to school with the intention of getting a teaching certificate and coaching at the high school level.

That all changed the summer after his last season. While he was working at the Activity Center and helping with basketball camps, Butterfield approached Carruthers with the proposition of being his assistant.

“That was the first moment that I had ever even thought of being a college coach,” Carruthers said. “It had never even entered my mind.”

Carruthers had to learn several important details of the job at the collegiate level on the run, he said.

Mainly, he had to learn the importance of the distance a coach has to have with a player.

Carruthers said this was the biggest thing Butterfield pushed. Along with that, he also had to learn the ins and outs of recruiting on the fly. It was the one thing he had no idea how to do, Carruthers said, but it has now become the one aspect of the job that he cherishes more than anything.

“I really love recruiting because I really know what (Butterfield) wants from a player,” he said. “And I’ve got to go and find those qualities in a player and in a person and see if UT Dallas is a valid option and go about getting them here.”

As head of recruiting, Carruthers has been able to find players such as Kyle Schleigh, who went on to leave as the program’s all-time leader in scoring.

More importantly for Butterfield, Carruthers hasn’t simply bowed down and agreed with the head coach on every decision.

“He’s a great sounding board,” Butterfield said. “If I say ‘I think it’s this way.’ If he doesn’t believe it, then he’s going to tell me ‘I don’t agree with you.’ … The primary goal of the assistant coach is to assist the head coach, and he does that beautifully.”

Carruthers said he one day aspires to be a head coach, something Butterfield thinks will happen.

“I know that once he gets a chance to take hold of a program, everybody better watch out,” Butterfield said. “I tell him all the time ‘We’ve got to get you out of here, for your own personal, professional development. But, I’m going to be crying the whole way.” 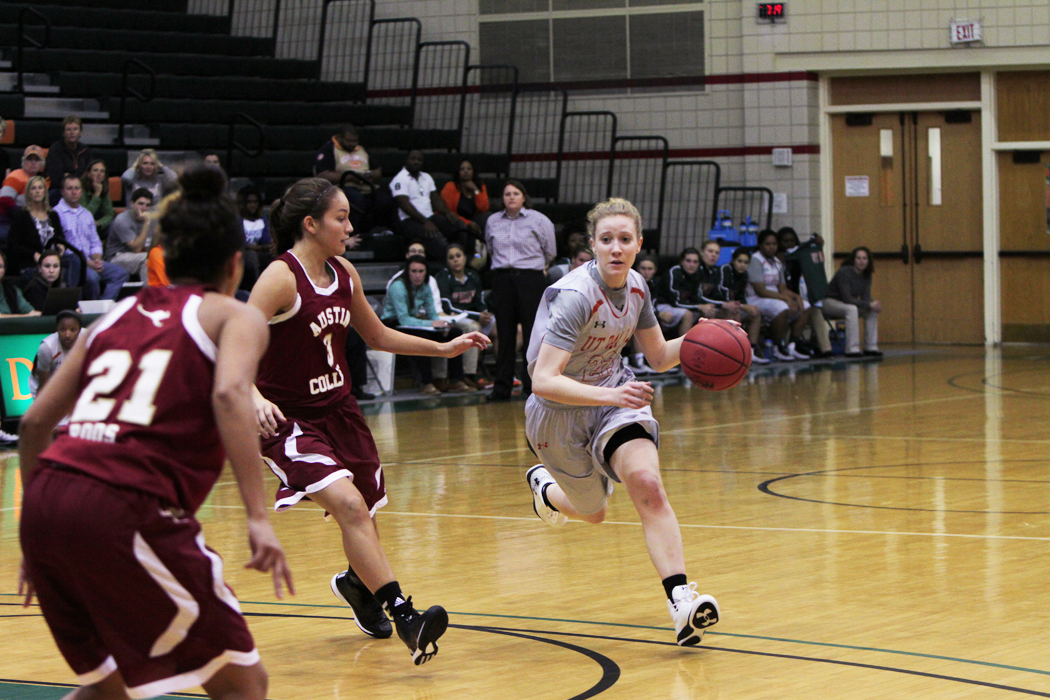 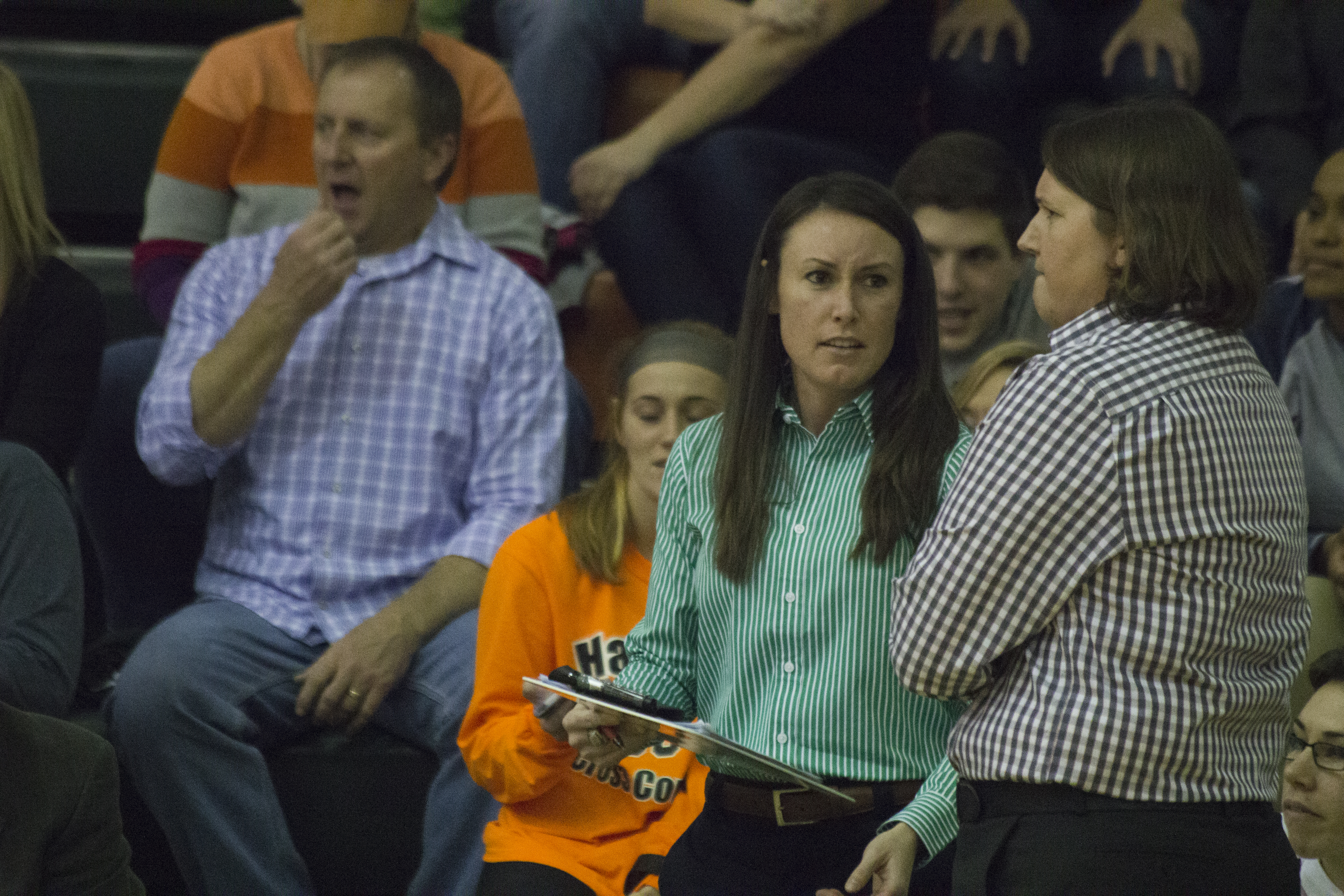