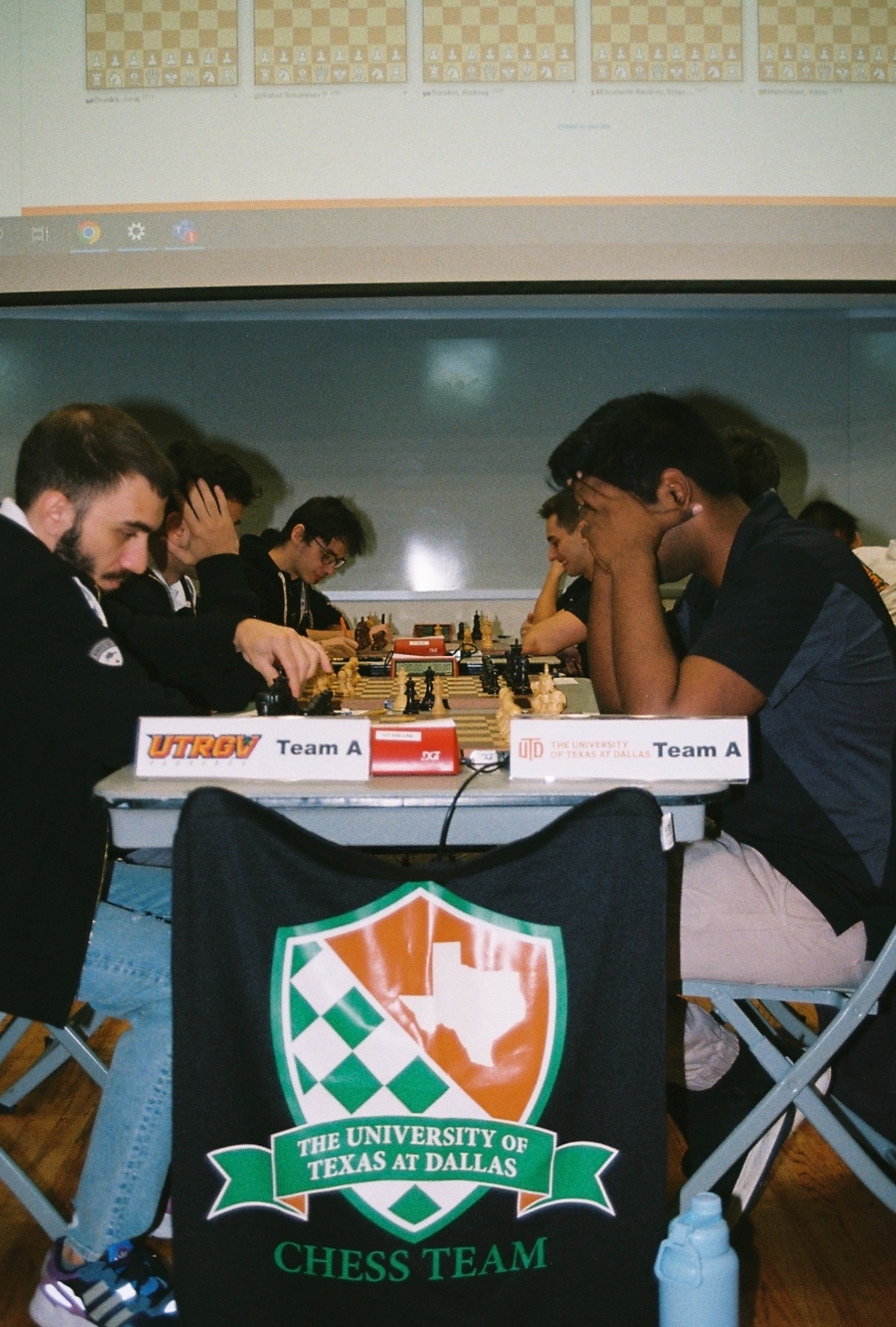 UTD players face off against players from UTRGV with Ivan Schitco, David Brodsky and Rahul Srivatshav playing on the right. They would go on to win the tournament. Photo courtesy of Nikhilesh Prabhakar.

The UTD chess teams swept the boards at the 2022 Texas Collegiate Super Finals following a rough start. The A team won first, and the B team won second five years after its first victory at the tournament.

The Super Finals were held at the Jonsson Performance Hall on campus from Oct. 22-23 with six competing teams from three Texas universities: UTD, UT Rio Grande Valley (UTRGV) and Texas Tech University (TTU). According to Coach Julio Sadorra, all three teams qualified for The Super Finals at the Southwest Collegiate Team Championship in the spring.

“As the coach of a team, you know who works well with who, and I know their relative strengths,” Sadorra said. “So I wanted them to be both equally strong. That’s why I put at least one grandmaster in team B, so he’s there in team B and he’s teaming up with the other international masters who are capable of beating grandmasters.”

The two-day tournament consisted of two rounds per day for each team. While both team A and team B lost the first round on day 1, they made a comeback on their second round. UTD team A had a 2.5-1.5 lead against UTRGV team B, and UTD team B had a 3.5-0.5 leam against TTU team B. According to computer science graduate student Razvan Preotu — from UTD team B — it was easier to make a comeback during round 2 since both teams lost by small margins.

“When you lose close, it’s better losing a close match than not close at all,” Preotu said. “So I guess we just moved on from the first match, we obviously prepared for the remaining ones, and we just did our best.”

The wins from round 2 lifted the spirits of the players for day 2 of the tournament, where UTD team A won 4-0 against TTU team B, while UTD team B drew against UTRGV A 2-2. Preotu said round 3 was a crucial moment for his team as he won for the first time against Kamil Dragun, a GM from UTRGV team A.

“On move 21 is black and I think I found a very nice idea to spend the next three moves improving my position of my knight,” he said. “So after White played his move, my knight was on A5 and I spent three moves going Knight C6, Knight E7 and Knight D5. So moving from A5 to D5… this improvement of the knight was too much for my opponent to handle and his position pretty quickly collapsed after.”

The teams ended round 4 with a win despite nerve wracking moments in the previous rounds, ultimately winning the tournament. Sadorra attributes the victory to the students’ preparation, teamwork and will to win.

“[Day 2] was more crucial. Both teams showed who they are,” Sadorra said. “They have team affirmations and their message is basically ‘We are champions,’ and for them to become one, they have to think like it and behave like it. They really showed that they’re champions not just in a title… they earned it on day 2.”

Team captain and economics sophomore Ivan Schitco — from team A — said holding the big trophy with Macovei at the awards ceremony was rewarding. The team is preparing for the Pan-American Championship in January, the biggest intercollegiate tournament in the world.

“We have the potential and the ambition coupled with belief to win it, so we’re gonna exert ourselves to the maximum to become the champions,” Schitco said. “Go Comets!”